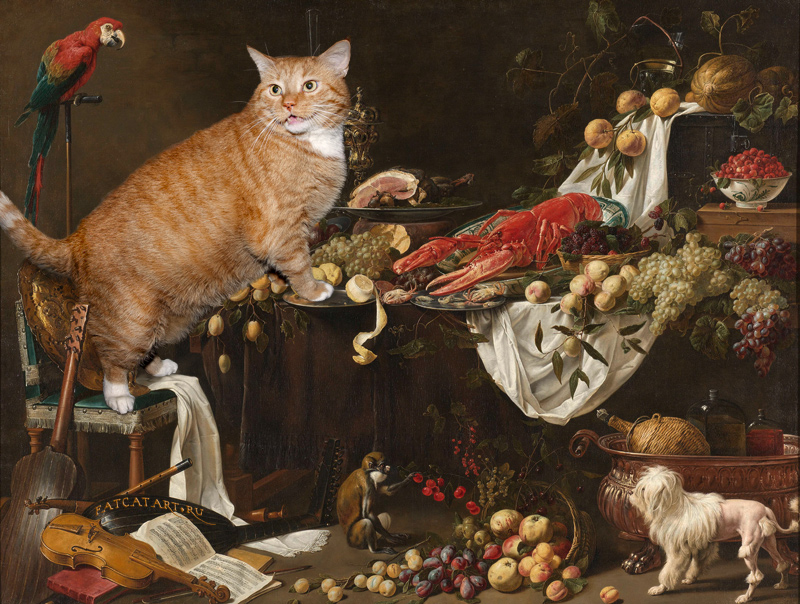 the idea:
I am professional artist, and made a lot of different projects, one was bizarre fashion show. I toured it years ago in Europe, and I had a cat model in it, here is Marc the cat, he toured with me:

So I was used to work with cats
Zarathustra is my mother’s cat; I adopted him after she died in 2008. I was so close to my mother, and miss her so much. Zarathustra was and is a living memory of my mother. She asked me to take care of him, and so do I, as far as I can.
Zarathustra saved me from depression after my mother’s death.
A friend of mine once told me: “you did such a nice art with your cat Marc in your LEM theatre , why you don’t do any art with your new cat Zarathustra, he is so funny!” And he was: he was fat, my mother spoiled him immensely, it is her words on the site, that he is “the best cat in the world”.

I thought: why not, it will amuse me, and began to think what shall I do. It was useless to put wings on him, because he is evidently unable to fly in his physic conditions. So i thought that may be i can make a photo session with food in style of Dutch still life paintings. To imagine how it will look like I decided to photoshop the cat into some painting (I used Photoshop for sketches of the sets of my events and costumes) And I don’t know why I photoshopped it into another painting, Danae by Rembradt. Then I made 4 more classic paintings, and I sent it to some friends of mine, artists and gallerists, just to see their reaction. Never before I saw serious ladies crying to tears and laying down from laugh.
This encouraged me a lot, and I launched the site FatCatArt.

My other inspiration for this project was Internet. I am philosopher by education, and though I left philosophy to be an artist, i am still very interested in it.
I am fascinated by the spread of information via internet, I was always interested in interned culture.
I dreamt of making an experiment: to create an Internet meme that should be beautiful and clever, this virus should bring some information, some stimulus to know more. It should be a virus of freedom of aspiring to a new knowledge and not virus of simple repeating of what have been done before. People discovering my cat paintings should google originals. Of course not all of them do that, but just a few of them doing worth a play. The cat modified paintings fit ideally to my idea of clever and beautiful meme. Making this project brought a lot of knowledge for me also, I studied a lot the style of old masters, their technique, to make paintings look as if they are real paintings made by old master.

The working process:
1. I take photos of cat Zarathustra when he chooses to pose (and he love to pose) or at specially made “mise en scene” photo sessions. They look like shooting on a green screen of a fantasy movie with Zarathustra as a star, I have a team of friends art professionals to make them, normally 3 person is needed: one camera man, director (me) and director’s assistant. The cat likes to be photographed, for him it is an interesting game and a lot of attention to his precious person.
2. I taks the images of famous artworks in high resolution, work a lot over the files, editing color appearance etc.
3. Then i carefully photoshop the cat in the right position into the painting’s digital image. It is the most difficult and lengthiest part of the work; the cat must fit ideally, in position, in expression, one image can be a combination of many photos. Sometimes it takes months to take the right photo. The cat appearing in the artwork must not damage the composition of the painting by old master, he must bring there additional sense and alter totally the meaning of it. Sometimes i do a lot of work on the rest of the picture, painting in the computer and emulating the style of the great master. The cat image, which is a digital modern photo, should also be in the style of the older painting, in the same time resting an internet cute kitty.
4. The result is high resolution multi-layered .psd image file that is FatCatArt original piece. As FatCatArt originals are electronic files, they are changeable: i can change details, color appearance, update the original painting image or change the cat’s photo. Work rests open, it is never finished, when i am living:))

Digital art pieces come to real world in different ways: they can be shown at the screen, or printed in different techniques, and they can be recreated manually, printed on canvas and then painted
For me it is an investigation of the relations between digital and real appearance of art: for exhemple digital look doesn’t show texture, or colors of such materials as gold or some other historical pigments

I hope I explained it:) 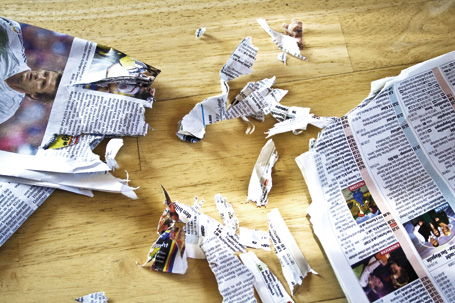